Not too much new going on here. I'm looking forward to a day off tomorrow to get caught up! I subbed 4 days last week and all 3 so far this week. All in grades K-2!! Tiring! But fun. As hard as it is, I really do love it. When a little Kindergarten boy looks up at you during circle time and says, "I wish I could marry you.", it makes it all worth it :-) Even if he did blurt out a curse word an hour earlier.
Anyway, just wasting time until "Project Runway" comes on, my latest TV addiction! Love it! Brings me back to my designing days. I really think Michael should win!

Ashley, me and Mimi. 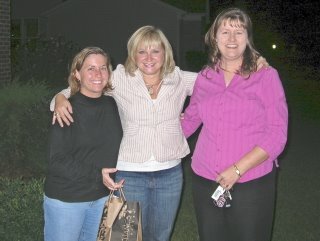 My neighbors and I went to PF Changs on Wednesday night. We had been trying to plan it forever because Mimi had never been there and something always came up. Well, even though I had subbed all day and had a Brownie field trip after school, I wasn't about to cancel. I drug my tired self out and had a great meal and a great time. 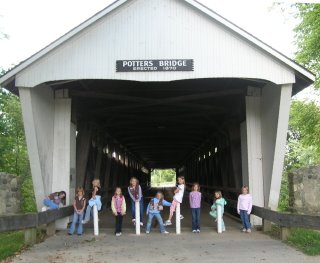 Lily's Brownie troop did a trail clean up at Potter's Bridge as a community service project. They managed to find a little trash---some I won't mention--if you know what I mean. 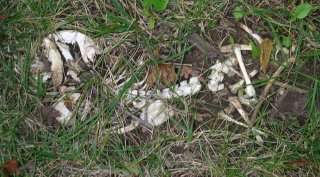 One of the girls noticed this animal skeleton. It was pretty cool because it was virtually undisturbed and all there-we think it might have been a racoon. You could see it's teeth, spine, everything. 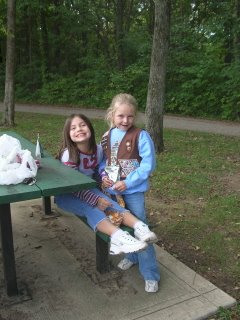 Lily with her friend Anna.

This was a super busy week! I subbed Monday-Thursday. Had dance Monday night, football practice Tuesday and Thurday night and Brownie field trip after school Wednesday! Next week is not near as busy and I'm so glad! I'm exhausted!!

We decided to go to Lexington this weekend because it was Wyatt's bye week in football. My brother ended up getting tickets to the UK game and he, Jeff, my dad and Wyatt all went. They had a great time. Lily, my mom and I had "girls night out". We had a great time, shopped and went to the best Chinese buffet I have ever been to--yum!! They just opened a new store in Lexington and it's AWESOME! It's called Gabriel Brothers and it's kind of like TJ Maxx only much bigger, better and cheaper! They had lots of great name brands and the prices were super! I know I'll be hitting that whenever we get to Lexington!
We also visited the temporary memorial for the plane that crashed there recently , killing 49 people. It was really sad. There was a wedding picture and invitation of the couple that had just gotten married and were on their way to their honeymoon. So sad! We all signed the memorial. It's going to be made into a permanent memorial eventually. 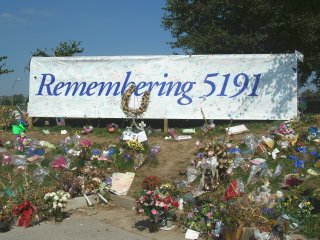 The memorial at the airport. 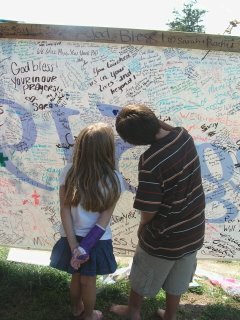 Wyatt and Lily signing the memorial. The front and back were covered in signatures. 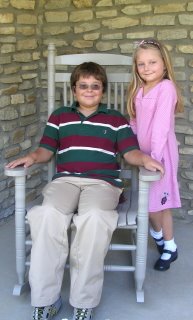 All dressed up for church. 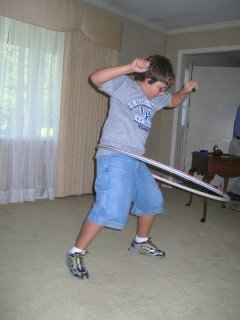 Wyatt learned to hula hoop!! They were using my hula hoop I had as a little girl--they loved it! 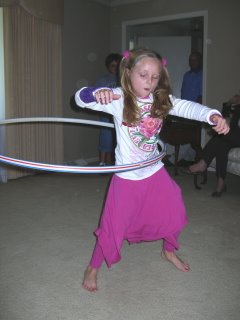 Man this girl can hula hoop! She can go forever! I didn't even know she could do it, but I guess they play with one at recess and she has gotten very good! 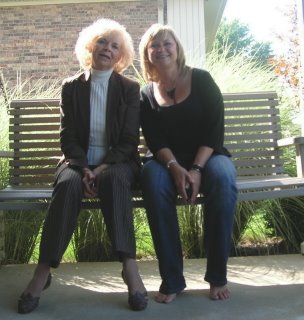 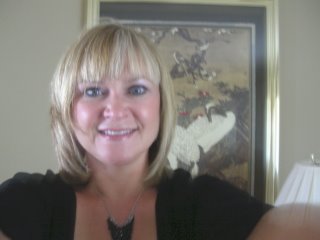 This is a scary pic because I took it myself(I kind of look cross-eyed!), but this is my new haircut. I guess I look pretty different because Friday I was standing across the street talking to the neighbor when the kids got off the bus. Lily looked right at me and kept walking until I yelled her name---she said she didn't know who I was!!! 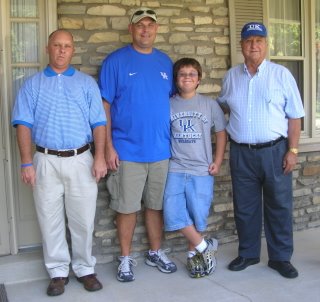 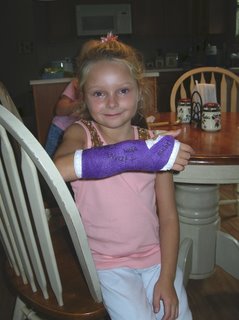 Lily had a follow up appointment at the ortho doctor today. She got her over the elbow cast off and got a much smaller one--purple this time! We were so concerned about her being able to straighten her elbow out(that can be a problem when you have a cast on for so long and can't bend it). We at least thought it would be stiff for a while and it would take a day or so to straighten it. Jeff said, half joking, "Watch her just straighten it right out the minute it comes off." You guessed it---that's just what she did. I really don't know where she gets her toughness from. She has to have this one on for 3 weeks and then done! It will be a lot easier to get clothes over this one! Just in time for long sleeves! 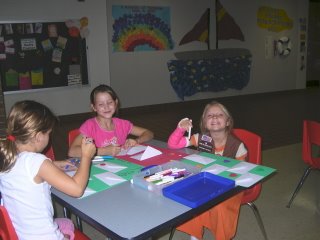 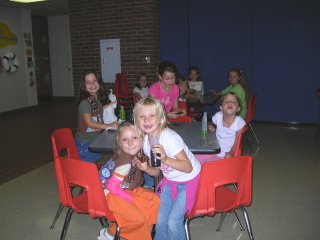 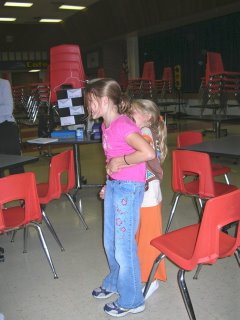 Lily practicing the Heimlich maneuver on Lauren. We were learning about first aide. Look at the size difference between them--and they are in the same grade!

These are the only pictures I've taken lately. Lily's Brownie meeting. Not too much going on around here--sneaking a break from cleaning right now. It seems Saturdays have become our cleaning day--we all pitch in and usually get it all done before lunch--it works out pretty well.
Yesterday I subbed 1/2 a day in the MOMD room(moderately mentally disabled). I really enjoy being in there. I was with a little 1st grade girl with Down's Syndrome most of the time. She is so sweet. I will always have a special place in my heart for Down's kids because I was told Lily had a high chance of having it when I was pregnant with her. They are usually such sweet kids.
Well, better go get some more cleaning done!
Have a great weekend everyone! 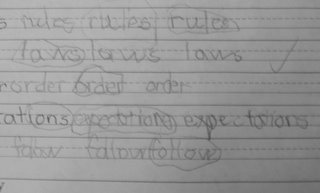 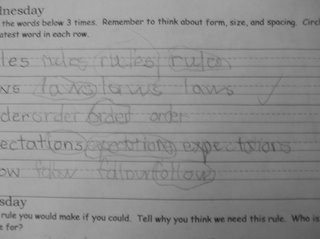 This is Lily's homework with her left hand. (She's right handed.) I'm the only lefty in the family. I think she does a great job writing with her left hand. It's not nearly as good as her right handed writing, but very legible, I think. Wyatt could always write with both also. I think they get some of their ambidextrous traits from me. I've always been totally mixed up---doing half of things with left and half with right. I'll be glad when she gets her regular writing back, though. She goes a week from tomorrow and gets a short cast on for probably 3 weeks, and then she's done. She had an X-ray on Friday and she's healing great! She has not complained once about her cast. Most of the time, I forget it's there, too! Believe it or not, the only thing she has missed is riding her bike!

Posted by Melody Searcy at 1:14 AM 0 comments 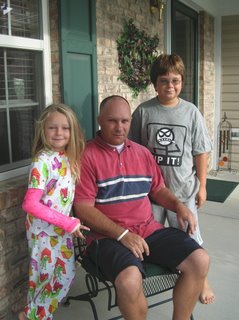 Wyatt and Lily with Uncle Steve. 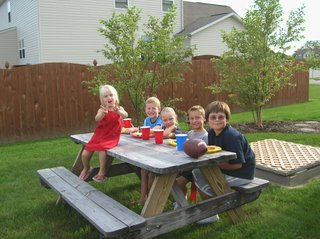 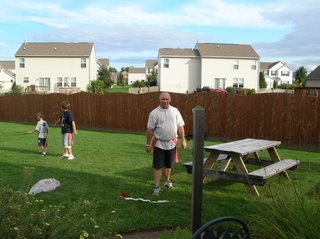 Steve with his flags on-he was in sports heaven. 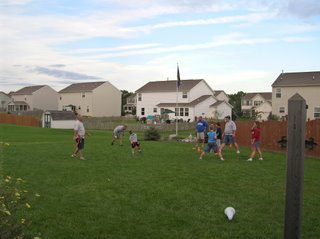 Well, my brother did a fabulous job with the kids while Jeff and I were gone to a wedding in Chicago. He kept them running the whole time, movie(How to Eat Fried Worms--they loved it), Ben and Ari's, McDonald's, pizza--you name it--they did it. They had a great time and Wyatt said he wanted him to move in with us. We got back about 1:00 yesterday and Steve was gonna leave. He wanted to get home to watch the UK game last night. We had a get together with our neighbors planned and I could tell he really wanted to come--so we convinced him to stay. Especially once we told him they have a 52 inch hi def TV he could watch the game on. They played a 2 hour game of flag football with the kids. My brother LOVES sports and said these are his kind of neighbors. We are so lucky to have the neighbors we do. They are truly like family to us since we don't have any around here. He said we are so lucky to have this and we should never move--I'm sure the kids would agree with him. I think he hated to leave! It was really nice to have him around for a few days. 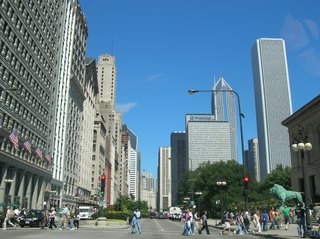 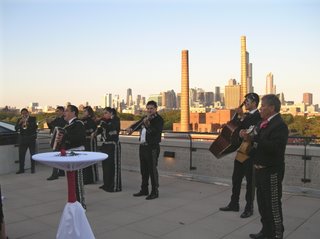 Mariachis on the rooftop with Chicago sky line in the distance. 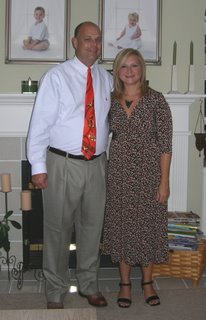 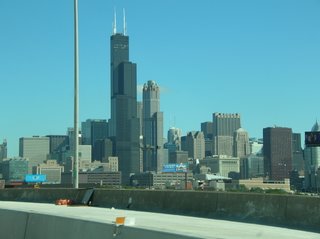 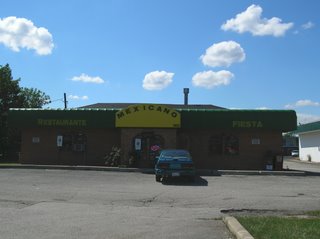 This is what we think is the best Mexican restaurant anywhere. It was right across the street from our apartment when we lived in Chicago suburbs and we walked there for dinner at least once a week-sometimes more. It is so authentic-not like anything you would find around here. It's a lady from Mexico that owns it--she actually waited on us Saturday. We told her that we hadn't been there for 15 years and that it hadn't changed a bit and was the best Mexican food we had ever had(even in Mexico!). Sadly, she told us that she is closing in 2 months to move back to Mexico, after 19 years of business. She said her daughter is almost out of school now and she wants to move back to her family. I'm glad we got to go one more time at least.