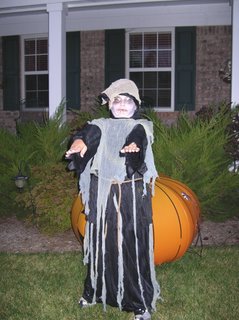 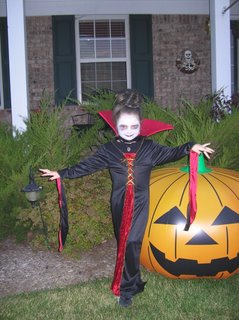 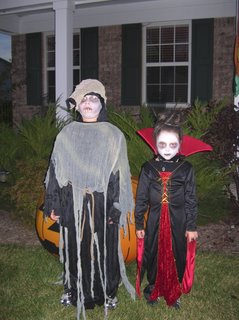 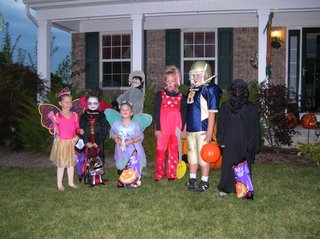 The kids had a great time trick-or-treating tonight!! We were so lucky that the rain held out and we actually had perfect weather. It wasn't even all that cold. We pretty much covered the whole neighborhood. After about 2 hours-they had had it!! We got way too much candy as usual! Lily is in the shower now trying to get all the black hairspray and make-up off! That stuff is messy! She wants to wear her black nail polish to school tomorrow. Oh, speaking of school, Lily had the BEST day today! She was the only one in her whole class to get a 100% on her reading test ( it was a big test over the whole reading book that they used last semester). She got to go visit the principal for a pat on the back and a Superstar Student pencil! She was so excited! She also got 100% on her spelling pre-test and got the challenge list for the week! She's feeling really good!

Well, Jeff just told me that the black hairspary is not coming out in the shower, so I need to go see what I can do!! Yikes!! 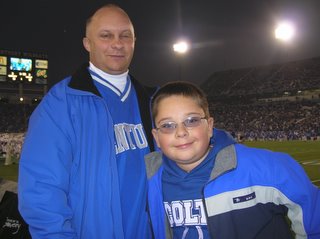 My bother Steve and Wyatt at UK football game. 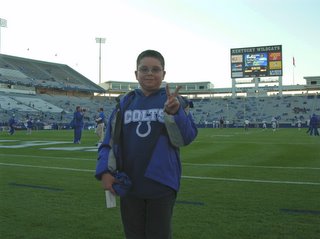 Wyatt on the field-they had 1st row seats and security let Wyatt walk out there. 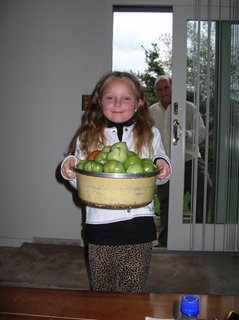 Lily and the green tomatoes she picked from Papaw's garden. 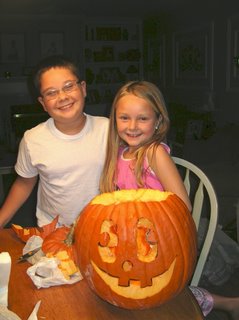 Wyatt and Lily with the pumpkin we carved last night. 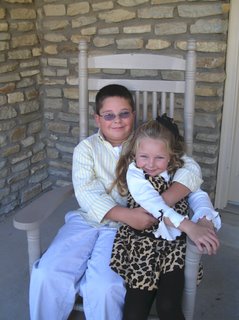 Wyatt and Lily after church at Nema and Papaw's house.

It was nice to get to Kentucky and visit family. The kids had a great time and hated to leave. Wyatt, Jeff and my brother Steve got to go to a UK football game--and they actually won!! Wyatt was really into it and didn't take his eyes off the game. Now that he's played football he really enjoys watching it. I was basically sick the whole time we were there--I guess it's just a cold--I'm afraid it may have turned into bronchitis, though and Jeff is trying to get me to go to the doctor. Why do I hate going so much? We'll see how the day goes.

I got really bad news from my Mom this morning. My Uncle--my Dad's brother (who was 88 years old) was killed in a car accident last night. Someone ran a stop light and hit him. He was airlifted to the hospital but didn't make it. He lived in Paducah, Ky and is not a relative I saw much at all. I know my Dad is devastated.

Posted by Melody Searcy at 8:45 AM 0 comments 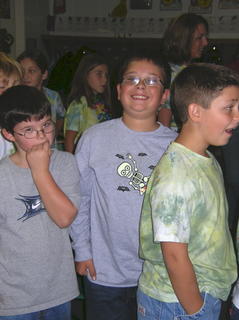 Wyatt at his school Halloween party. 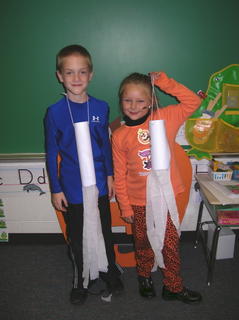 Lily and Reid with their ghost windsocks. 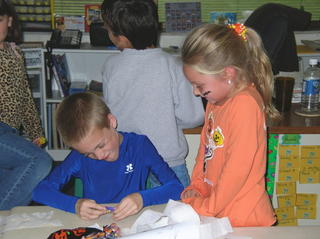 Check out the looks on their faces--do you think they like each other? 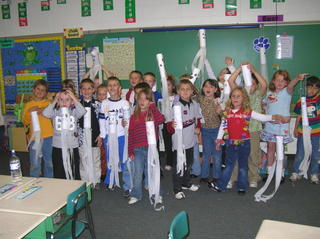 Lily's class with their ghost windsock craft. Lily's way in the back-you can barely see her!

The kids had their school Halloween parties yesterday. I helped with Lily's party so only got to sneak in Wyatt's for a minute. He'll get me for the Christmas party. I was in charge of the craft and I think they turned out really cute. Thanks to Amy for directing me to the Family Fun website for ideas. I found this cute ghost windsock idea and altered it a little. It was really simple.

Lily is totally infatuated with this little boy Reid in her class---and I have to say I think he's equally infatuated with her. I need to get them together sometime because he actually lives on our street--down on the other end, though. They insisted on the picture of just the two of them and both kept pushing the other kids away when they tried to get in the picture! It was cute. She said to me after school "Mom, do you know why I want Reid to come over?" I said no, why--and she got all embarrassed. She finally admitted(which I had already figured out) that it was so she could kiss him!! We had a conversation about how she is too young to kiss boys(except for Dad and Wyatt). Man, I am scared for her teen-age years!!!!

We are trying to get ready to go to Kentucky for the long weekend--it's Fall break today and tomorrow. We're leaving tonight and I have a TON to do. Hopefully I'll get some cute pictures while there to post when we get back. 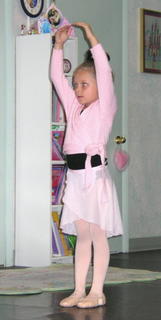 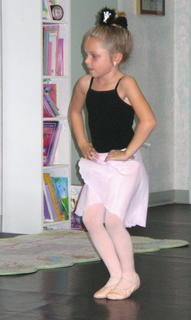 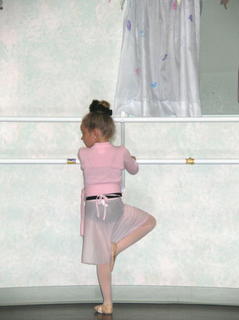 Tonight Lily's class had a performance night at dance. They showed us some ballet moves and then did a tap dance to "Razzle Dazzle Dancer". It was so cute. I was really impressed with how Lily did. She is the youngest one in the class and I think she is one of the best (could I just be biased? HAHA) It is a little scary to me how well she can shake those hips!!! She just LOVES to dance!!! 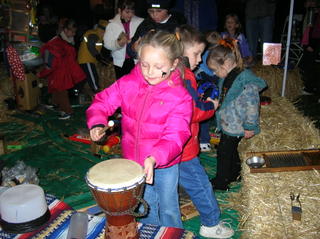 They had a really neat music section-here's Lily playing the drum. 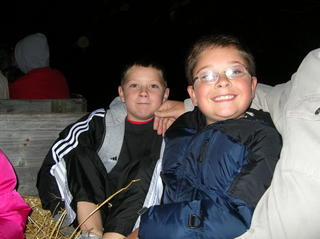 Wyatt and his friend Trevor on the "Headless Horseman" hayride. 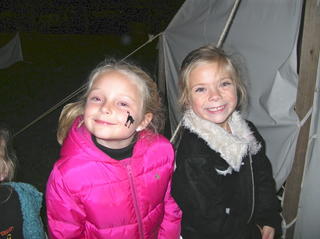 Lily and her friend Emma getting ready to go into the fortune teller tent. 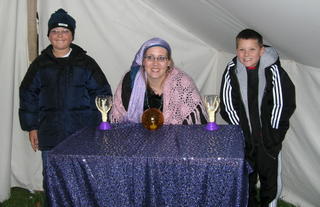 Wyatt and Trevor after getting their fortunes told.

Last night we met our good friends the Allens at Conner Prairie for their Headless Horseman event. They have a "scary" hayride through the woods and the Headless Horseman appears! I was suprised, none of the kids were scared at all-they actually laughed the whole time. It started raining the minute we got on the hayride and came down pretty hard until the very minute we stepped off and then it didn't rain the rest of the night! It was still fun, though. They had a lot to do there--a puppet show, a great music section where the kids could play all kinds of homemade instuments along with the music and a fortune teller in a tent that actually knew everything about them!! Wonder how she knew all that stuff? I think the boys had her all figured out--considering they saw us sign a mysterious "permission slip" before they could go in!! They still loved it! It was a really fun night and put us in the Halloween spirit!

WE ARE THE CHAMPIONS!!!! 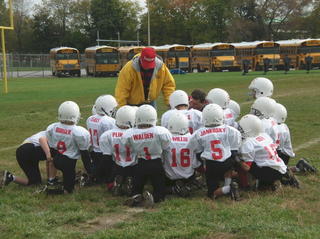 The huddle before the game. 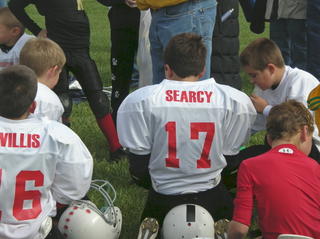 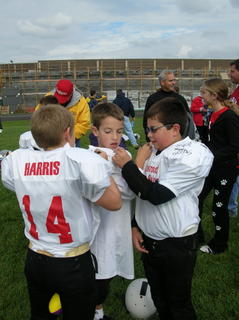 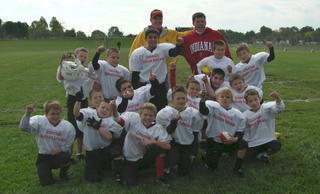 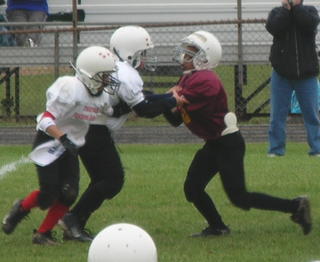 Wyatt pushing back the line.


We are SO excited!!!!!!! Wyatt's team-the Indiana Hoosiers-won the 3rd and 4th grade Noblesville Elementary Football League Championship today! Wyatt was so happy, he cried! I love it that he wears his emotions on his sleeve that way!(Well, most of the time I love it!) The score was 12-6 and it was a nail biter!!! The only downer was that a kid from the other team was hurt and had to be taken out on a stretcher-he hurt his neck and actually lost feeling in his lower body for a while. He gave the thumbs-up while being wheeled off, though and they think he's going to be OK. How scary! We'll keep him in our thoughts and prayers for sure.
This also means I will have 2 nights during the week and Saturdays freed up for a while! YAY! 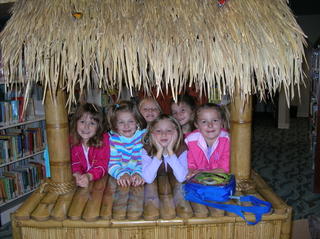 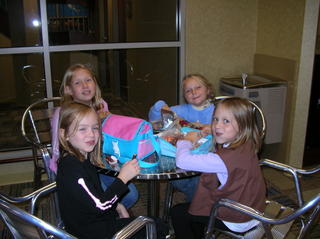 The kids got out of school at 11:40 today because of conferences. Lily had a Brownie field trip originally scheduled for Conner Prairie (an outdoor living museum that replicates different scenes from the 1800's). We had to go to plan "B" because of cold and rainy weather, so we went to the library and had lunch and then saw a movie instead. The funny part was, I think they were more excited to see a movie than Conner Prairie anyway!! These are a couple of pics from the library, which is newly remodeled and very nice. They actually have a room just for eating that has lots of vending machines and some tables. A far cry from our old library! Looks like we may have this same yucky weather for Wyatt's big game tomorrow! Oh, well, hopefully we'll be cheering so loud we won't notice!! Go HOOSIERS!!!! 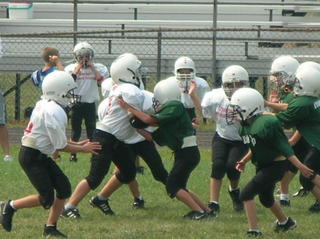 OK, I finally found it. A way that I can "scrapbook"(and journal) that is easy, free and not so time consuming!(Thanks Amy!) I am going to try my best to keep up with it!
Here is a picture of Wyatt playing football. He's the one in the white jersey and black elbow pads blocking. Their last game is Saturday---and it's the championship!! Keep your fingers crossed for us!!
Well, I'm going to spend the morning at school helping with iron-on transfers for t-shirts! Then the kids get out early today. Why can't I ever say "NO"? Oh well, I do love being at school. My house will just have to stay a mess I guess!!

Posted by Melody Searcy at 8:45 AM 1 comments